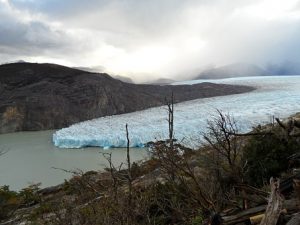 A glacier is a persistent body of dense ice that is constantly moving under its own weight; it forms where the accumulation of snow exceeds its ablation (melting and sublimation) over many years, often centuries. Glaciers slowly deform and flow due to stresses induced by their weight, creating crevasses, seracs, and other distinguishing features. They also abrade rock and debris from their substrate to create landforms such as cirques and moraines.  Glacial ice is the largest reservoir of fresh water on Earth. Because glacial mass is affected by long-term climatic changes, e.g., precipitation, mean temperature, and cloud cover, glacial mass  changes are considered among the most sensitive indicators of climate change . (Source: Wikipedia) – All the more reason to go out of your way to visit the spectacular glaciers listed here.

14 awesome glaciers you must see before they’re gone
Glaciers belong to one of nature’s most phenomenal spectacles. Here are 14 of the best Format: Single page listing HostelBookers
Read more ...

World’s 7 largest glaciers by continent
A large, slow-moving mass of ice that forms where snow falls at a greater rate, glaciers are the largest reservoir
Read more ...

Where to see glaciers before they disappear
It is a well-known fact that glaciers are disappearing year by year. All the more reason to see them in
Read more ...

Glacier skiing: Europe’s ten top glaciers
An alternative to downhill piste skiing. Why not combine the thrill of skiing by combining it with glacier skiing. Plus,
Read more ...

The world’s most stunning glaciers
A lttle-known fact is that at least 48 countries worldwide are said to contain glaciers, here are five of the
Read more ...

Top 10 ice caves in the world
Ice caves are the amazing wonders of nature, hiding under the glaciers. Many tours to the glaciers include visiting the
Read more ...

16 cool facts about glaciers
Want to know more about glaciers? Here are some facts that will surely impress you. Format: Single page listing Mental
Read more ...
Please follow and like us: